For those that follow along with Nerd Herd Running on Facebook, you saw that a group of us made it out to this year’s CANCERCON to witness first-hand how Stupid Cancer helps young adult cancer patients to “get connected, get educated, get inspired, and get busy living”.  Not only did we get to interact with the patients, survivors, and care givers personally impacted by our fundraising efforts, but we also found time for a little bit of shenanigans on the side. 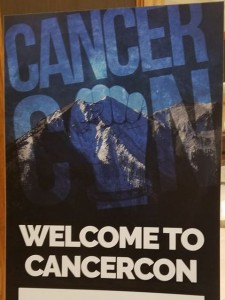 Here are some of the highlights from our trip:

The Fun Run.  The Nerd Herd was fortunate to hook-up with The Ulman Cancer Fund for Young Adults before the conference.  Ulman sponsors a “Cancer to 5K” training program designed for cancer survivors where survivors run/walk alongside a running “Sherpa” with the ultimate goal of completing a 5K goal race. As they say, “Take your life back from cancer… one mile at a time!”  They hosted the Stupid Cancer Fun Run/Walk for the CANCERCON attendees, and we were able to play along. 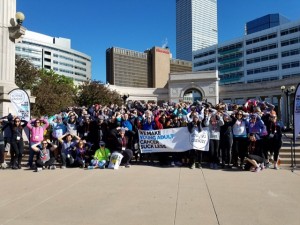 For our part, we were able to add to the participants’ fun run experience by handing out Nerd Herd t-shirts, and awarding them some Nerd Herd Trilogy finisher medals.  We were energized meeting so many fans of our past trilogies, and excited by the reactions from those who were just learning about us.  We’re hopeful that many of these folks will get a chance to enjoy this year’s trilogy and keep the momentum going for Stupid Cancer.

The “org” of stupidcancer.org.  Some of the Herd have had the distinct pleasure of previously meeting the leadership and staff at Stupid Cancer. For those of us in Denver, however, it was a true pleasure being able to finally witness their energy and their enthusiasm at CANCERCON.  Matthew, Alli, and Thea went out of their way to make us (and everyone else) feel like family. Their personalities created a climate that clearly motivated the conference volunteers to do their best, empowered attendees to take action in the fight for young adult cancer advocacy, and made every individual survivor and caregiver feel that their story was important to everyone at the conference.  Everyone we witnessed from Stupid Cancer genuinely cared about the people who came to the conference, were available and ready to help in any situation, and were truly empathetic with the joys and pains experienced by attendees. 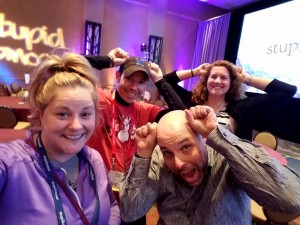 I appreciated having the opportunity to personally thank Matthew Zachary for making my own cancer “suck a little less.”  At a low morale point in my cancer journey (see my story here), I hopped onto Stupid Cancer’s website hoping for some advice and guidance. Unfortunately, I only saw the “cancer survivors from 13 to 39″ staring at me at the top of the screen. “Seriously?!” I said to myself angrily. “I’m too old for Stupid Cancer?!” (I was 41). Nerd Jamison got wind of this and sent Matthew a note. A short time later, Matthew had recorded a video for me – offering a special dispensation so I could be considered a “young adult.”

The Red Lanyard.  When attendees first checked-in at CANCERCON, they were given a chance to pick a lanyard color to represent why they were there; patient/survivor, caregiver, advocate, other.  Initially, I selected the “other” color since our primary purpose for attending was to be recognized for our fundraising (see below).  However, based on the strong urging of Nerd Erinn (and, I believe, conspiring with my wife), I went back and switched to the patient/survivor red lanyard. I’m so thankful I did. It had an immediate impact to my CANCERCON experience.  The red lanyard was an invitation to share my story with others, and learn about my fellow survivors’ own journeys. 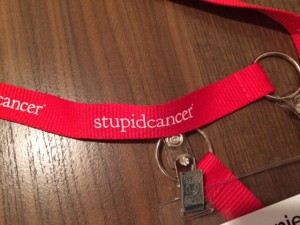 The beer.  According to the Denver Brewer’s Guide, there are over 80 craft breweries in and around Denver.  And while the CANCERCON schedule didn’t afford me an opportunity to visit them, I was still able to sample a good many of the beers they offered.  As a matter of fact, across the three days I was in Denver, I sampled over 28 different craft and regional beers! (it helps when there’s a Yardhouse in the hotel lobby). Denver truly is a craft-beer lover’s paradise.  And with access to so many amazing craft beers, it makes you wonder why the citizens of Colorado have to rely on a different substance to get them through life. But I digress… 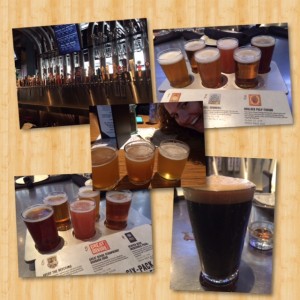 The Skirt Sports experience.  Nerd Erinn stepped away from the conference to explore the greater Denver region, which included a stop at the Skirt Sports flagship store in Boulder. There she met founder Nicole DeBoom, Noelle, Keri and a group of lively local Ambassadors. She went on a snowy run with them (for as long as she could keep up at 6,000 feet altitude), talked shop and taught them the all important “Ears Up” salute! 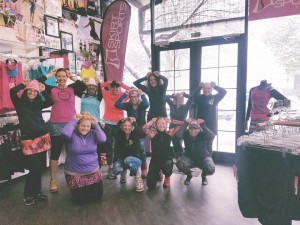 The Epic Award.  By far, the highlight-of-highlights was being part of the CANCERCON awards ceremony.  Over the past four years, the Nerd Herd Running Racing Series has raised over $85,000 to support Stupid Cancer’s advocacy of young adult cancer patients/survivors.  At this year’s CANCERCON, they wanted to recognize the Herd’s efforts and generously bestow upon us their annual Epic Award.  Head Nerd Jamison had conflicting shenanigans for the weekend, so the rest of the team in Denver had the distinct pleasure of walking on stage and accepting the award on behalf of all the Nerds. Of course, being absent from the event didn’t prevent Jamison from getting himself in front of the crowd.  In a pre-taped message, Jamison thanked Stupid Cancer, and announced the Nerd Herd stretch goal of trying to surpass $100K in total fundraising for Stupid Cancer with the 2017 racing series. 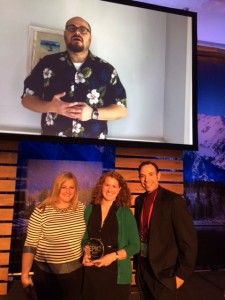 A virtual race series deserves a virtual acceptance speech. Nerds Erinn, Julie and I were joined by a larger-than-life Nerd Jamison.

I’m not one who generally likes to jet off to a conference and miss time with my family.  But CANCERCON proved to be more than a worthwhile experience for me. I came home feeling more confident about dealing with my own cancer survivorship, and re-energized to work, with the rest of the Nerds, in getting our next race series up and running. Clearly, Nerd Herd Running has made an impact to Stupid Cancer, and I’m so fortunate to have (and continue to have) played a small part in that success.  Ears Up! 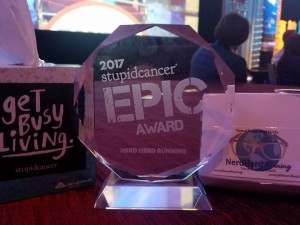